The 56.6% drop in arrivals of U.S. visitors since the restrictions imposed by the Donald Trump administration in June 2017 boosted a 7% contraction in the total of foreign visitors in the first three months of 2018, according to official Cuban data from last April1.1 In 2017, after Obama’s policy of opening, almost 620,000 Americans visited Cuba, six times more than the previous year.

Since June 2017, Trump has announced a series of restrictions and policy changes that include:

—ban (for U.S. nationals) on making any financial transaction with a group of 180 entities allegedly linked to the Cuban defense, intelligence and security services

—forced withdrawal of the majority of the officials of the U.S. Embassy in Havana and, the other way around, of the Cuban Embassy in Washington D.C.

—the Travel Warning issued by the Department of State in September 2017, and

—the Department of State’s new Travel Advisory system presented in January 2018, which classifies Cuba as a Level 3: “reconsider traveling due to the attacks against the health of the workers of the U.S. Embassy in Havana.”

A survey by the Center for Responsible Travel (CREST), in which 42 U.S. tour operators that took more than 17,000 persons to Cuba in 2017 participated,2 revealed that 85 percent of the surveyed enterprises saw a greater drop in their reservations, or an increase in their cancelations in the second half of 2017 compared to the first half; 66 percent has experienced cancelations from their travel partners (universities, museums, professional associations, etc.), and 85 percent forecasts less people-to-people travel reservations in 2018 than those of 2017.

The principal reasons they cited to explain the drop in U.S. visitors were:

“People can still go to Cuba independently but practically no one knows about it,” said John McAuliff, executive director of the Fund for Reconciliation and Development, which promotes engagement between Cuba and the United States. “The private bed and breakfasts are hurting; the airlines and private restaurants are hurting. Between the travel warning and changing the categories of travel it has taken a toll.”3

While informal conversations with Havana’s private bed and breakfast, restaurant and bar owners, craftspeople, taxi drivers and coachmen, who last year had a numerous American clientele, confirmed that their businesses have significantly suffered, no research had been carried out regarding this.

Estadounidenses a Cuba: Yes, you may come!

As part of their ongoing work, the professor and 5th year students of the subject of Urban Economy, of the San Gerónimo de La Habana University College, adapted the CREST survey and applied it to a sample of businesses and entrepreneurs, state-run and private, between March and April 2018. Following is a summary of the results.

A team of students interviewed private bed and breakfast owners in Havana. Two of the eight that were interviewed are linked to Airbnb.  Among the eight, they received a total of 286 American visitors in the different modalities during 2017, of which 97% stayed in these two B&Bs, mainly in groups. The others received clients principally from other countries. To date this year, a total of 62 U.S. tourists have stayed in all the surveyed B&Bs. Out of them. 97% also stayed in B&Bs linked to Airbnb.

Compared to American tourism’s performance in the first quarter of 2018 and the same period in 2017, these two B&Bs report a decrease of 8 to 10% and a third one that received eight travelers in 2017 hasn’t received any to date this year. However, while the rest of the interviewees said they had no expectations in terms of U.S. tourism in 2018, the two B&Bs that work with Airbnb expressed favorable expectations for the rest of the present year.

A surveyed travel agency, which mainly works with the Puerto Rican and Dominican Republic market in the multidestination modality, saw its Puerto Rican clientele fall 20% to date in 2018, compared to the same period in 2017. Its expectations for this year are of a still greater decrease since the reservations have been considerably reduced. Among the causes for the drop, they point to the “ban on American individual trips to Cuba” and the “increase in the price/costs to travel to Cuba.” 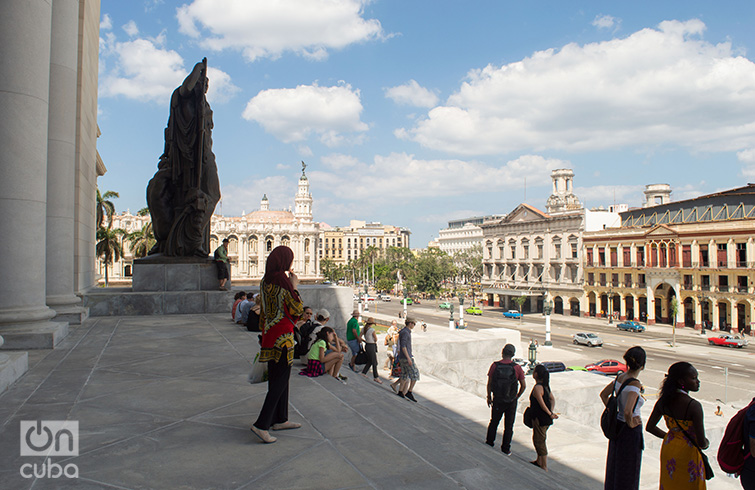 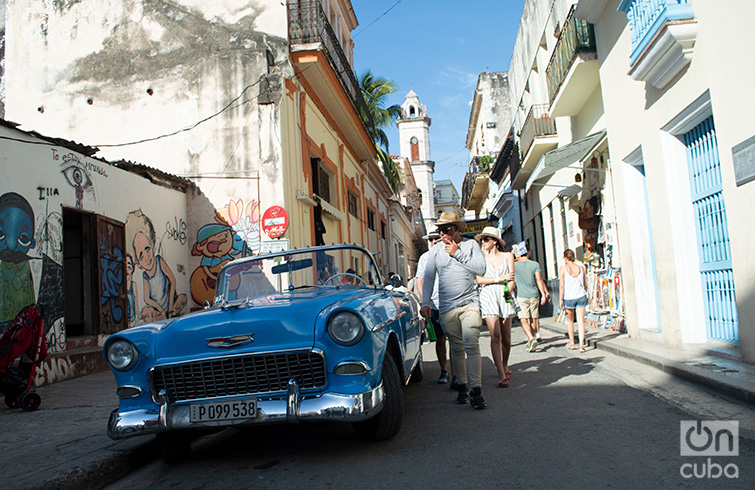 Another team concentrated on a group of gastronomic centers – large and small state-run and private restaurants – which cater to Americans. They summed up that the surveyed large ones lost 11% of their U.S. clients in the first quarter of 2018 compared to 2017, and from 5% of the individual tourists they went to 80%, which shows the strong drop in group tourism. Something similar happened to the large state-run and small private restaurants: a decrease of 10 to 25% of American tourism, especially group tourists, and the small state-run restaurants said they had only serviced individuals and had suffered a more than 50% drop in their U.S. clients.

Two students who also work as salespeople in two crafts fairs in Old Havana interviewed several private craftspeople, asking them: what type of U.S. travelers did you tend to in your business in 2017? They said that 25-45% were individual tourists; 10-15% group tourists; 5-20% Cuban Americans and 15-30% travelers from other countries. In one of the fairs the numbers oscillated from 10 to 25 tourists a day in 2017, for approximately 4,000-9,000 visitors in the year. In the first quarter of 2018 that amount dropped between 5 and 20 tourists a day, for a 25-45% wane compared to January-March 2017.

In the other, where sculptors and silversmiths were interviewed, the drop oscillated between 3 and 16%. When asked what expectations they have for the rest of 2018, they estimate a wane of 25-50%. Among the principal causes they pointed mainly to the ban on individual trips [sic] and the U.S. government’s travel warnings, as well as concerns about the health risk and safety in Cuba. Despite this they highlighted the satisfaction of the tourists who visit and buy in their establishments.

A team surveyed nine hotels, three in El Vedado, three in in the Historic Center of Old Havana and three in the outskirts to the east, all of them state-run. They were unable to apply the formal survey in some of them, but in these cases the desk workers informally answered. The following conclusions were revealed:

Comparing 2017 and 2018, until now the income for American tourism has decreased by more than half. Some of the causes they point to are: the ban on Americans’ individual trips to Cuba [sic], the U.S. government travel advisories and concerns about the health risks or safety in Cuba, the latter associated to Hurricane Irma that hit the country in 2017.

Another team went to see the coachmen and vintage car drivers who offer their services around the Parque Central. The first form part of a cooperative and the second are private workers. These said they had not been affected by Trump’s measures, since they cater to individual tourists from other countries, more than from the United States. Even so, they are not very optimistic about 2018, since they preview there will be a general decrease of tourism in Cuba.

The business establishments on Teniente Rey Street in Old Havana were surveyed by another team. They found that private businesses predominate over the state-run ones, which receive all types of tourists that appear in the survey: individual and in groups, from the United States and from other countries. All the establishments said that in 2017 they had tended to between 20 and 60 U.S. visitors a day, which in some cases represented 50-60% of their clientele.

In 2018 a considerable wane is being felt in the amount of U.S. clients and some businesses said they had almost received none to date this year. The impact is big: they affirm that it is a very demanding tourism but that it leaves good tips. In one case, the bar-restaurant became very popular among U.S. tourists in 2017, all of them ready to pay more, which is why the establishment increased the prices. Now, with the decrease in this tourism, European and Latin American travelers refuse to pay those prices and its business has increasingly dropped.

In general, they express pessimism in terms of U.S. tourism improving while Trump is still in government. The causes of the decrease are attributed to the travel bans, the U.S. government advisories and the increase in costs, as a consequence of traveling through third countries.

In short, the results of this preliminary survey suggest that the Trump measures and subsequent reduction in tourism from the United States have indeed affected almost all the Cuban tourist service providers who benefitted from the 2017 boom, large as well as small, state-run as well as private, and it has sown pessimism for 2018 and while the current White House tenant lasts.

When Trump announced his new Cuba policy last summer he said that his objective was to bypass “the military and the government to help the Cuban people themselves form businesses and pursue much better lives.” Actually, what has happened is exactly the opposite.