Take a Ride on One of These in Cuba!

Cuban people are known for being creative and innovative in many ways, making do with the raw materials available. Their forms of transportation are no exception. From motor and fuel-powered rides such as the beautiful American Classic Cars and the ingenious CocoTaxi to horse-drawn carriages and BiciTaxis, there is more than one unique way to get around during your visit to Cuba. Get familiarized with the names and different forms of transportation available on the island to make your upcoming trip to Cuba even more memorable. Until you can experience each one of them for yourself, this week we present you with some of the methods of transportation available to travelers while in Cuba.

Celebrities like Madonna, Jay Z, Beyoncé, Paris Hilton, Mick Jagger, and the Kardashians have enjoyed rides in an Almendron. What is an Almendron? It is the name affectionately given by Cubans to what we may know as larger American classic and vintage cars. For those of us who can appreciate the colors and the era these cars evoke back to the times of the Sock Hops, the Almedrones present not only a form of transportation but an opportunity to capture a unique moment atop one of these “in the wild” instead of at a museum or a collector’s garage. Any quick online search for classic cars in Cuba will give you a preview of the beautiful pictures captured with classic cars in the gorgeous and colonial backdrops of Havana or driving through the Malecon. 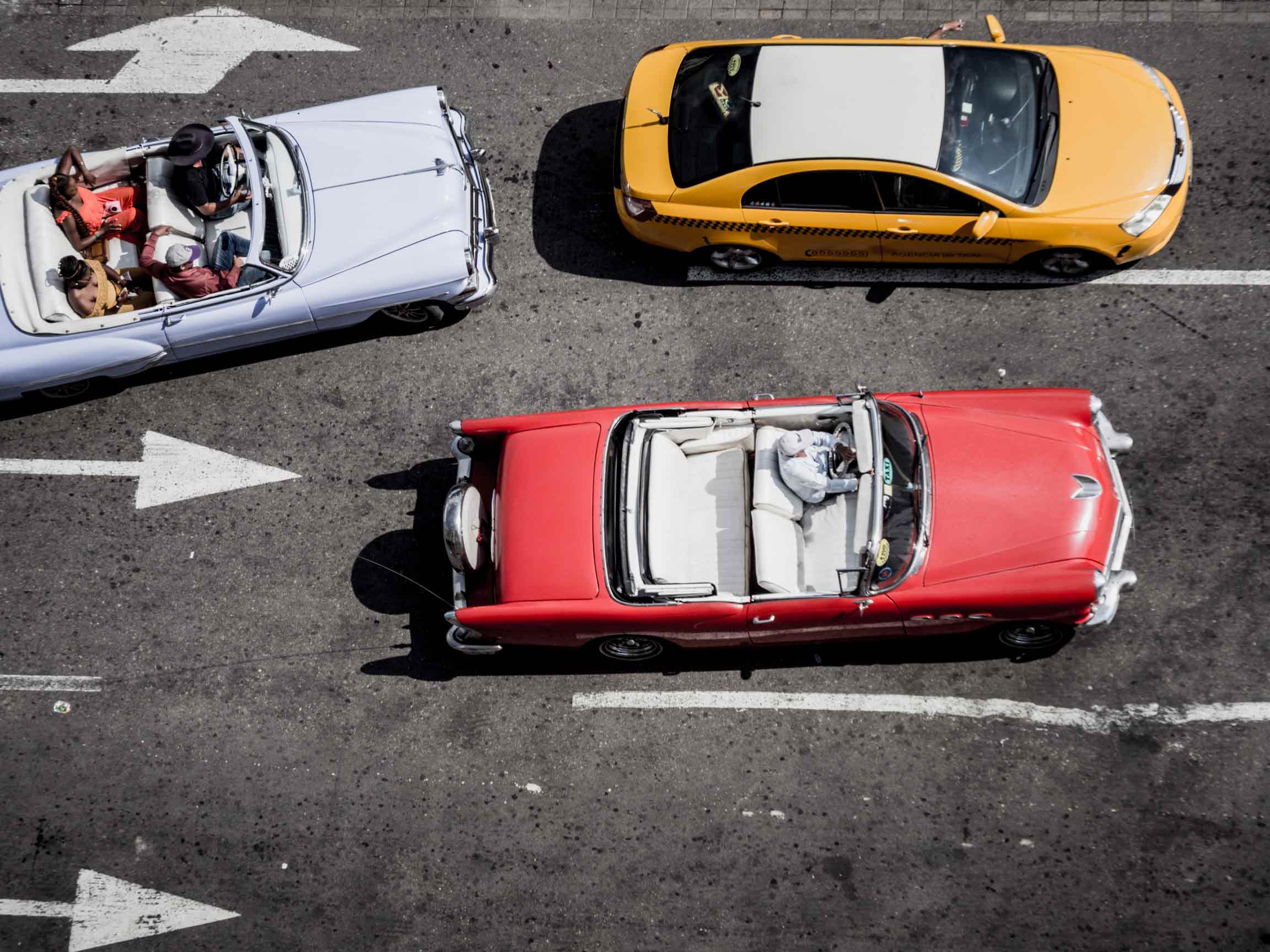 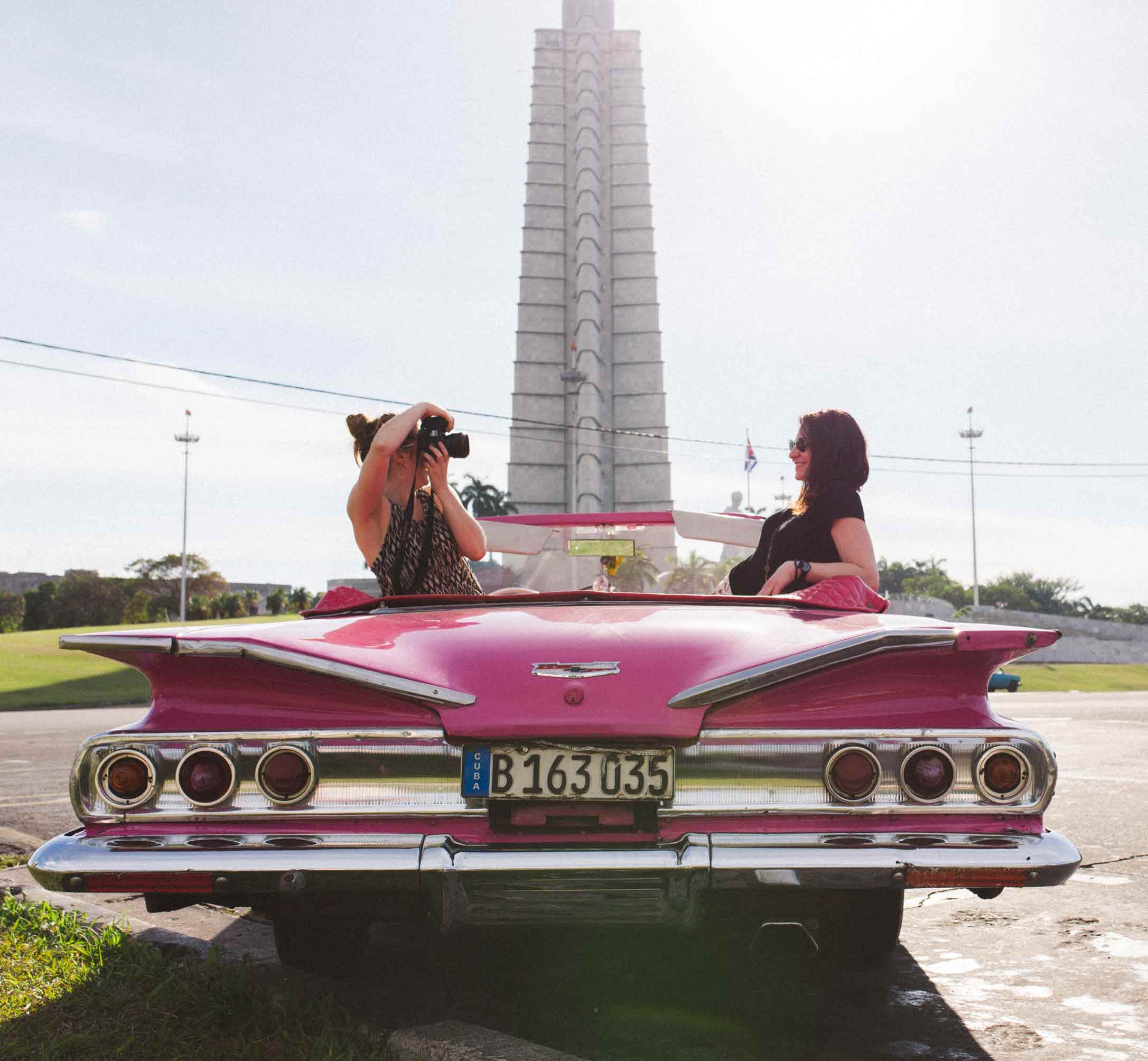 For those who are die-hard fans of classic or vintage cars from this period, some of the models found in the island are those Americans would pay thousands of dollars for to restore to their original state and with original arts. Several of these cars are over 60 years old and have been on the island even before the 50s. Amongst the makes and models that can be found in Cuba are the Chevrolet Bel Air Convertible, Ford Fairlane, Buick Roadmaster, Cadillac Eldorado, Mercury (Discontinued by Ford in 2010), Dodge, Pontiac (Ceased operations in 2010), and Oldsmobile, which ceased operations in 2004. Although some of these cars have been maintained with their original engines and parts, the supply of original parts is very limited in Cuba. Owners have been prompted to innovate and create alternative parts and pieces for their vehicles. Every modification adds to their charm and the story behind each one.

In Cuba, these classic and vintage cars line the streets and are often used as taxis. Travelers also have the option to take a Ride Through Havana On American Classic Cars, which is a guided tour through Old Havana in a variety of Almendrones. The trip has stops at The Capitol, Chinatown (Yes, Cuba has one too), Revolution Square, and other famous landmarks. The tour also goes into the upscale neighborhoods of Vedado and Miramar, where you will find luxurious homes worthy of home décor magazines. The visit would not be complete without enjoying delicious ice-cream at the traditional Coppelia ice-cream parlor and an authentic Cuban cocktail to celebrate in the best island style! Definitely, something to do for the experience of a lifetime.

If you are looking for a very original form of transportation, this one is indeed for you. Introduced in the 90s, the Coco Taxi does look like a large coconut driving down the streets of Havana. They can be easily spotted by their bright colors and unusual rounded shape. There are two types of Coco Taxi – one is yellow, which is distinguishable for tourists. The other is blue, and it is for locals. In its rickshaw-like makeup, the layout has the driver in the front and the passengers in an elongated backseat. It is designed with one wheel in the front and two wheels in the back and can carry two to three people at a time.

I am sure the drivers can tell several stories about the many rides they have given! The Coco Taxi can go up to about 30 mph, and it is mostly used as a way for foreigners to get around. Coco Taxis are available in the larger cities of Havana, the beach town of Varadero, and Trinidad. If you have the experience of a Coco Taxi in Cuba, make sure to capture the moment! Keep in mind that you may not have this experience anywhere else.

For those who want to go back in time or take a romantic couple’s ride along the streets of Havana, be sure to include in your plans a horse-drawn carriage. What better way to enjoy an afternoon with your hair flowing in the air while feeling a gentle breeze on your skin next to a loved one? Just as in the olden days, you and your travel companions can enjoy being transported around some of the main cities in Cuba in a charming carriage ride.

As with the traditional setup, the carriage is powered by a horse and guided by a driver. The carriage itself may range from an elegant body as we would imagine from the concept introduced during past centuries while others may be more rustic and modest resembling a small wagon. While the traditional carriage may accommodate a lower number of passengers, a larger carriage can transport a larger group. Many of the drivers will offer stories about the different points of interest along the ride, making it a more personalized experience for foreigners. The most common type of carriage available for travelers will be the traditional horse and carriage.

As the name says, a Cuban Bicitaxi is a bicycle taxi! If you have ever been to Coconut Grove in Miami, you may have seen a similar form of transportation. In Cuba, however, this goes beyond a tourist attraction. The Bicitaxi had its origin at a more regional level, emerging from the need for an inexpensive form of transportation. It later made its appearance at main cities across the country.

Whereas in other countries Bicitaxis may be preassembled, in Cuba no Bicitaxi is the same. They are often put together with spare parts from lighter cars or bicycle parts. They have a tricycle type of setup, with one wheel in the front and two in the back. With these, the driver powers the bicycle by pedaling. Several also have a sound system, allowing for radio reception during the ride. They accommodate about two people in car-like seats. The seats may range from more simple bucket seats to more elaborate and comfortable car seats. Riders are shaded from the sun by a discreet overhead roof. Although Bicitaxis are widely used by foreigners, they are a primary form of transportation for locals too and can be found across the country.

Cycling is considered by many a freeing experience and a way to get the blood flowing leisurely or even competitively. For those that enjoy the sun and a little bit of a workout, standard bicycles are also available to get around town in Cuba. Group tours such as the Pride Experience offer prearranged cycling tours through Havana, which also serve to burn off some of the calories gained from the delicious Cuban Cuisine. Imagine riding in front of the beautiful Capitol building while feeling the sun on your skin. What an experience! Prearranged bike tours are encouraged, in line with the people to people exchange in Cuba. Bicycles are available for daily rental on the island in various makes and models. They are also an inexpensive and environmentally friendly way to get around town.

An experienced travel agency with a local branch in Cuba, such as OnCuba Travel, can assist you and your travel partners with your transfer and transportation needs during your stay in Cuba. Whether you would like a dedicated private driver, arrange for transfers to and from the airport or port of arrival and departure, all these details can be taken care of for you and be prearranged in preparation for your trip. OnCuba Travel can also assist you with the arrangements necessary to travel to Cuba from the US legally and walk you through the process of visas, authorized travel categories, meeting all the required travel requirements, planning a land excursion, and group travel to Cuba. Ready to start planning your trip? Contact OnCuba Travel today.

We are going salsa dancing! Cuba is home to the salsa and rumba rhythms, both originating from Afro-Cuban roots. As the island prepares for the International Salsa Festival from April 22nd to April 29th, we will introduce you to the most popular dance styles and influences that permeate Cuba. We will also share more insight into shorter specialized excursions such as Dancing With Havana Compass Dance Company, which give you the opportunity to take in the highlights of the city as well as the appreciation of the local dance scene.

During the next blog, we will also present you with the Havana Biennial Art Exhibition, taking place from April 12th to May 19th. It is a gathering of talent with a spotlight on Latin American and Caribbean artists. This event only takes place every two years, so be sure to book your travel to Cuba soon to take advantage of these upcoming festivals. You may also opt for a curated experience, such as the Biennale Art at Havana for an insider’s look at the home studios and collectives with works by several Cuban artists. Stay tuned for more!