Cuban culture has been influenced by Spanish, African, Native, and Caribbean cultures. During a recent trip to Cuba, we had the opportunity to learn more about the African influence on the country’s culture. Two places we visited, the colorful and lively Callejón de Hamel and the Museo de Los Orishas gave us glimpses into how centuries have shaped Cuban culture.

It is one thing to read about it and another to experience it! The Callejón (Alleyway) started as a project bearing the name of Hamel, a real resident of the area. Our journey takes us there on a Sunday at noontime. One of the members of our team recommends that as the best time to go. Once we arrive, the reason is apparent. The allegoric crowd, the pulsating music, the graffiti, paintings, and artifacts across the alley create a vibrant environment.

The paint on the walls is in bright shades of red, blue, yellow, green and more. Although on the most part the paintings and drawings are not related, there is such an explosion of shapes and shades that everything comes together to capture all your sense. It is a gathering of musicians, artists, foreigners, and locals who come together to watch, to perform, or just to dance. It turns out that several artists have small galleries in this area. During your exploration, it may happen to you as it occurs to us that we stumble upon galleries with unique artwork inside.

Walking through the crowd one can catch glimpses of the writing on the walls. The quotes speak about experience, about life, about religion, about love, and many other topics. One of the places we discover is a small shop that houses elements for each one of the Orishas, the gods of the Yoruba religion.

During a very insightful conversation with the attendant, he shares with us that the Yoruba religion had its origins in Nigeria from the Yoruba culture. It made its way to Cuba during the time of the slave trade in the Caribbean, which brought groups from Africa. To continue practicing their religion, followers syncretized the Orishas with Catholic figures. The term syncretism, we learn, stands for a merging or amalgamation of different religions or cultures. It was how the integration between Catholicism and Yoruba religions started.

He also shares in detail that each one of the Orishas has a ruling element and distinct colors, as follows:

After learning more about the Orishas, we make our way through the Callejón, the live music pounds with tumbadora drum sounds, singing, dancing, and powerful lyrics. You cannot help but start dancing. Several people from the crowd also begin following along with the songs as in a chorus. Some from our group also join and follow along with the rhythm. There may be a video as evidence or two!

The Callejón has unique pieces such as bathtubs against the walls with quotes, tall tube-like structures, interpretations of insects, and alternate forms of parts used as seating. Other articles included mosaics, pinball type objects, and unusual attachments on the wall. Every nook had a little something to be discovered. One could likely visit several times and still not be able to cover every corner for the unique pieces displayed. It is colorful, exciting, passionate, and full of life. It is also a great spot to take pictures and capture the essence of your exploration. 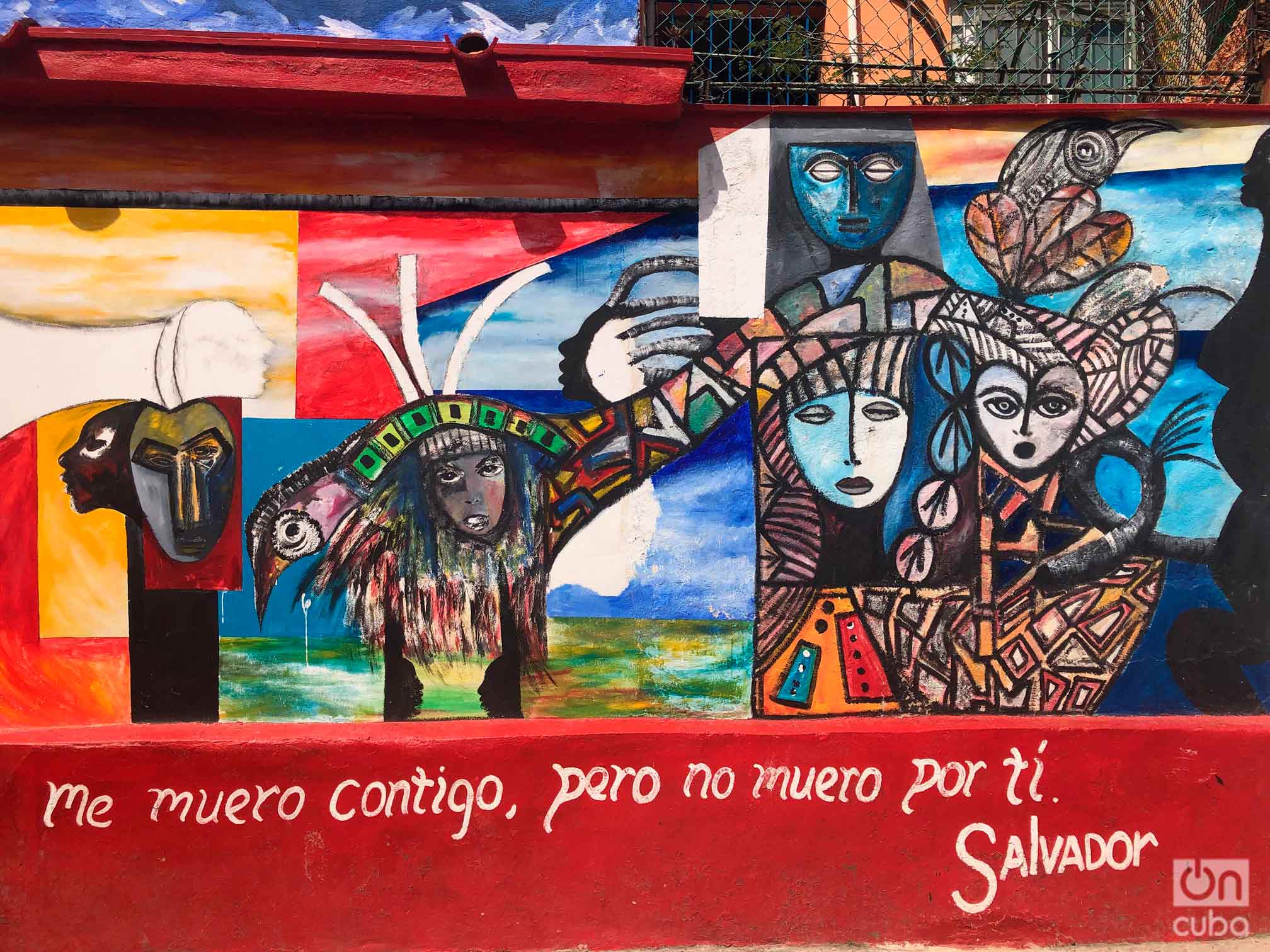 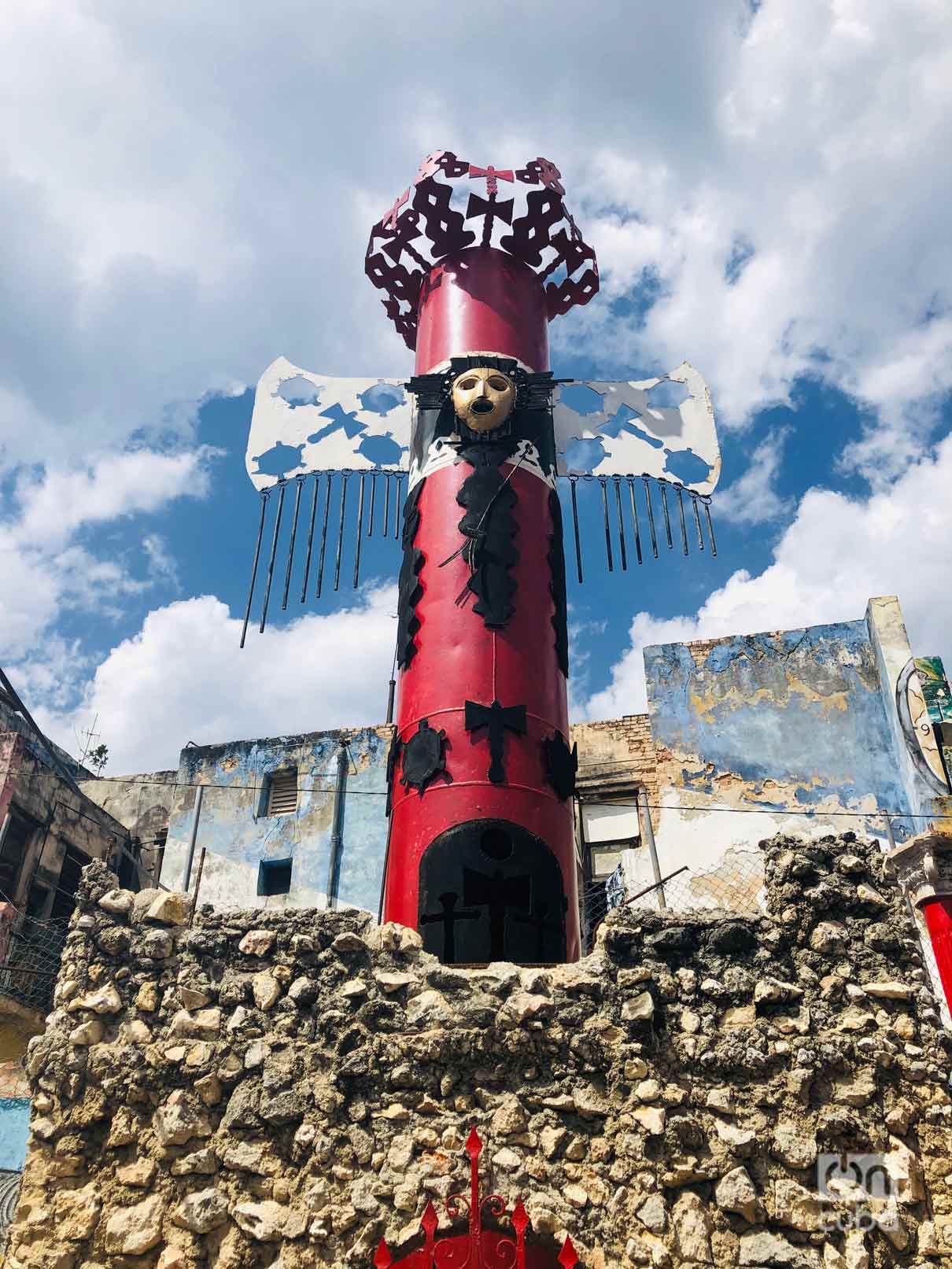 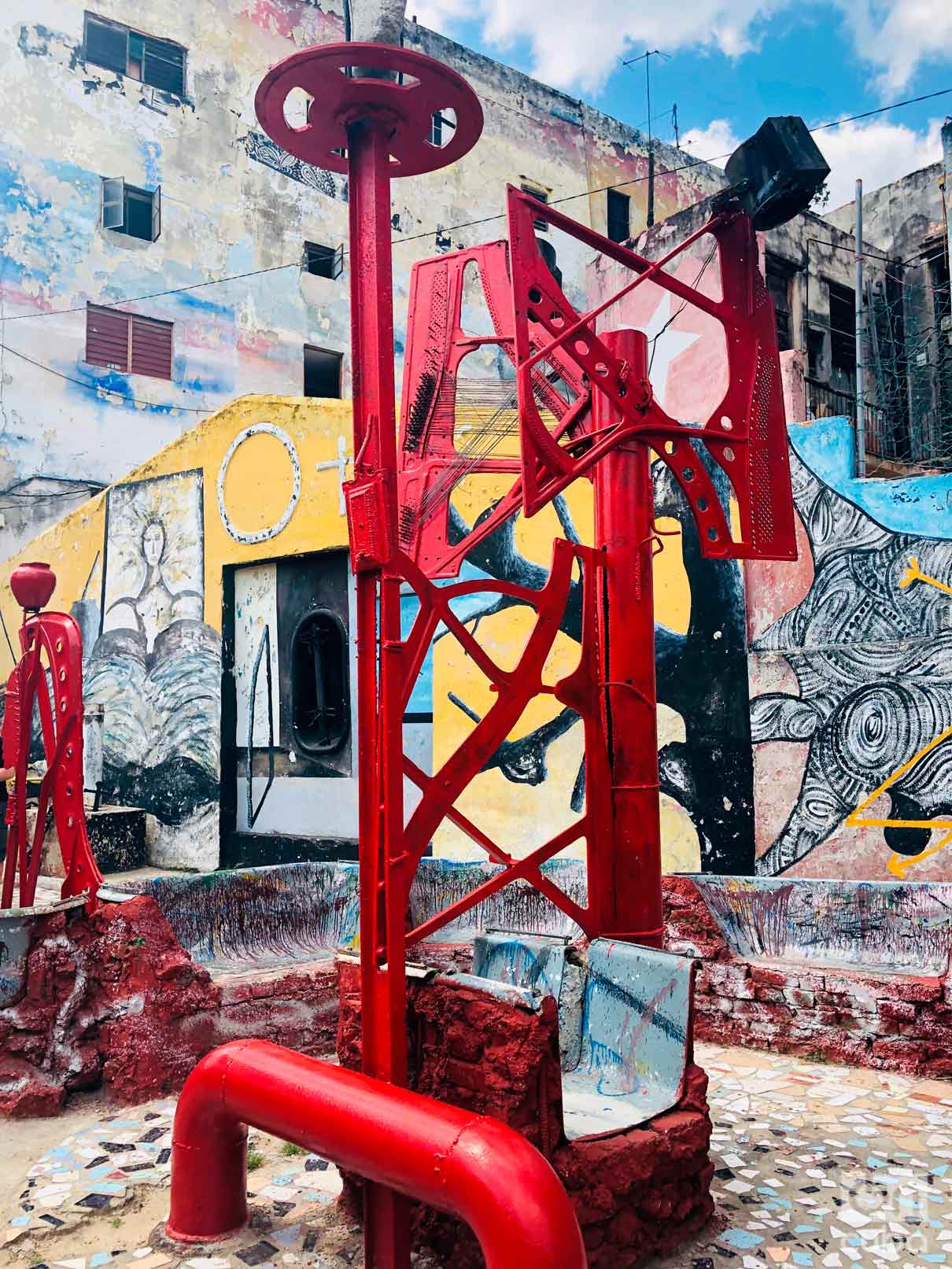 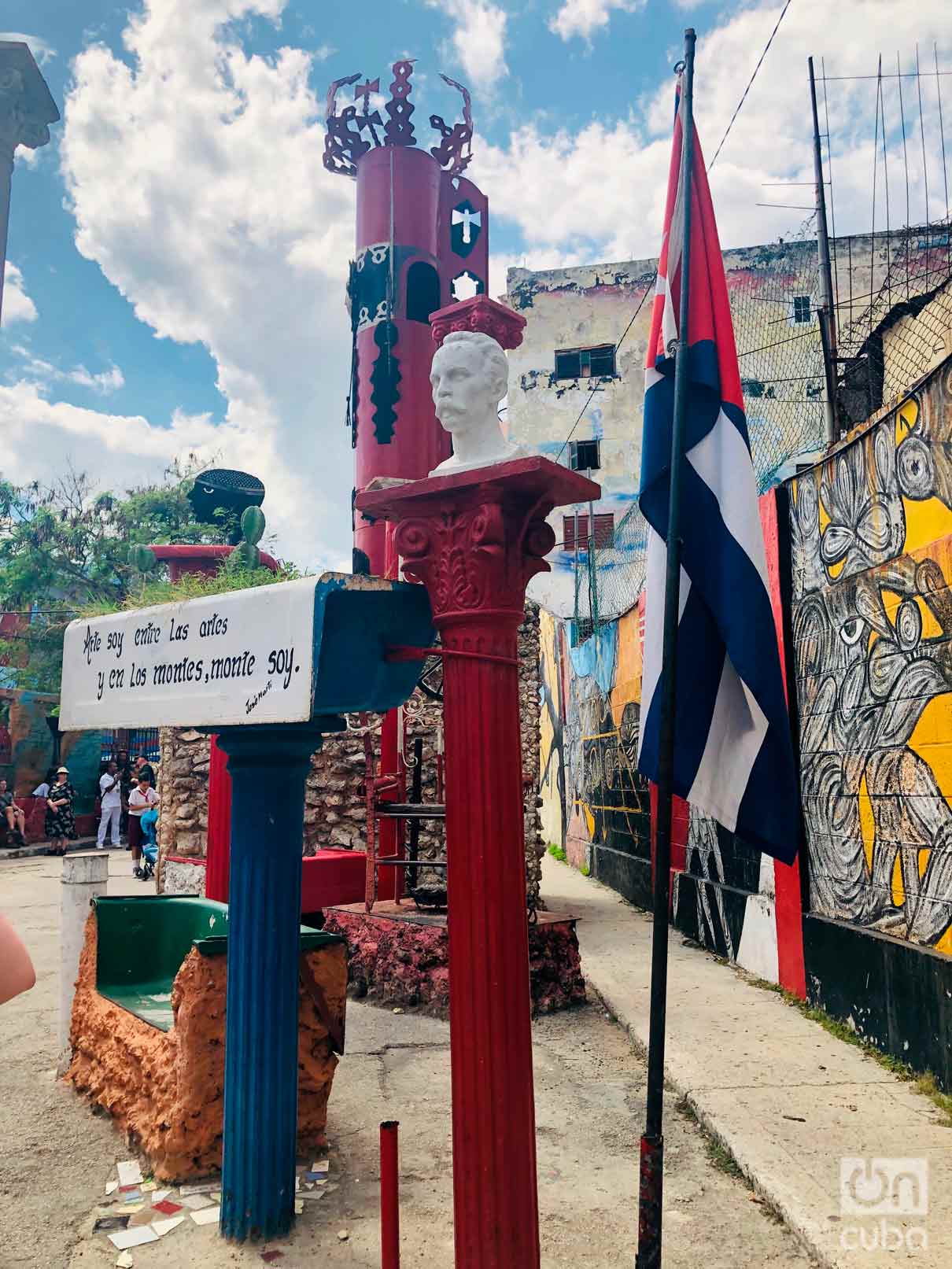 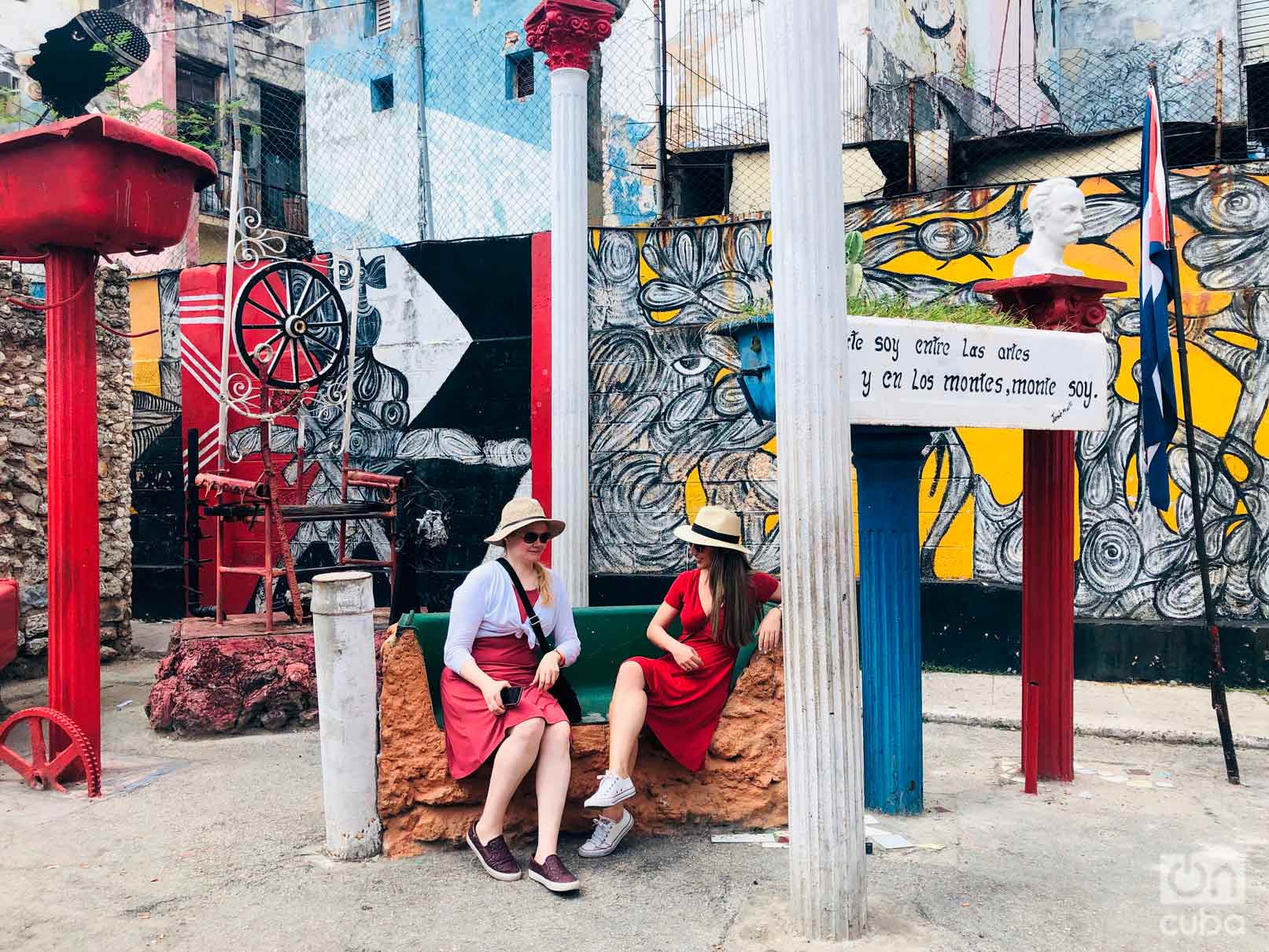 After learning a little bit about the Orishas in the Callejón de Hamel, our next stop was the Museo de Los Orishas in Havana. The guide shared with us that beyond being a museum, the building is also a temple. The second floor of the museum is lined with various figures with human features representing the Orishas. Each one is placed in an altar, surrounded by the elements, shapes, and colors that each one is known for. We learn that the temple regularly receives visitors from many countries such as the United States, Spain, Mexico, and Africa. Visitors mainly want to learn more from a cultural perspective. The temple also welcomes those who wish to be initiated in the religion.

The initiation process starts by learning which is a person’s Guardian Angel through a ceremony presided by a Babalao, the priest of the Yoruba religion. During the ceremony, he not only determines a person’s Guardian Angel, but also their past, their present, and their future. The early stages of initiations are a period of rebirth. Once the deity is determined, a person can speak directly to their saint and ask for what they need.

This religion does not have churches. Followers create altars in their homes. One of the pieces of furniture used to set up an altar is called a Canastillero, a solid wood piece of furniture with glass doors. Flowers and other elements with colors representative of the ruling saints can be used to adorn the altar. The Canastillero in the Museum is about 100 years old. The Ceiba is also the mythological tree of the religion. Traditionally, people go to the Ceiba tree to ask for three wishes. A replica of a Ceiba tree can also be found in the museum.

Make A Tour or Day Excursion Out of It

Anyone who visits Cuba should visit the Museo the Los Orishas and Callejón de Hamel to learn about an integral part of Cuban culture. These are just a little bit of what makes up the unique Cuban culture. The Cuba At A Glance and Morua – Maceo Project group programs include stops at the Museo de Los Orishas and the Callejón de Hamel. Individually, the Museo de Los Orishas is a stop in the Tres Lindas Cubanas Cigar and Rum tour, while the Callejón is part of the Pride Experience group program and the Cuban Rum, Cigars, and Art day excursion. OnCuba Travel, a professional travel agency specializing in legal travel to Cuba from the United States, offers these and other exciting cultural activities.

On our next blog, we will explore Cuban Cuisine. As we shared in a recent blog, Cuban Cuisine has Caribbean, African, Native, and Spanish influence. It is a unique blend of flavors delectable represented in its varied cuisine. Restaurants and Paladares, which are privately owned restaurants can be found all over the city. We recently had the opportunity to try several of them, from Old Havana to the heart of Havana – even San Cristobal, known as the restaurant that Barack Obama went to during his visit to Havana. We will cover the traditional dishes and where to savor them during your next culinary adventure to the beautiful Island of Cuba.