Living by myself in New York
Lidia Hernández Tapia 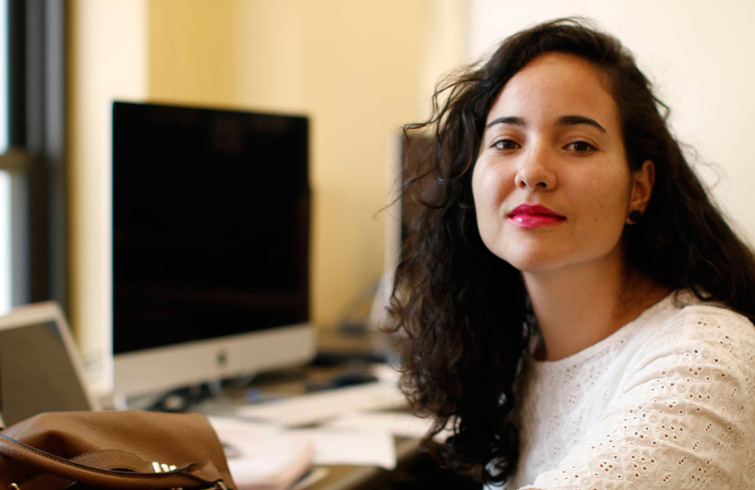 For the first anniversary of my arrival in the United States, I decided to treat myself to a visit to Disneyland. I went alone, as I had lived the major part of my days in New York. I took a lot of selfies, and a pic with Batman. Could it be that now I understand better this country? I thought. And instead of running from one attraction to the other, I started writing this essay about my Alice in Wonderland adventure.
Arriving in New York a year ago, flying from Havana, was in several ways not just a physical trip but also traveling in time. It was getting to the future, and challenging all logic known until then. I didn’t come looking for the American dream, but rather to study a master’s in Journalism in the City University of New York. I wanted to learn how the journalism of the next 20 years will be. I’ve ended up getting to know myself better through that mirror.
NY City has so many rare beauties. If you still haven’t gotten to love it, it’s because you don’t understand this place. You can be the homeless “loser” or you can make your dream come true. The city makes you feel it’s possible to do it. If you work like a “bad hombre” you indeed can be what you want to be. The best of you, like the smile of the model on the giant screen in Times Square, like the Brooklyn Bridge with its more than 100 years.
Well, you came here for that. To learn to challenge any certainty you had learned before arriving. You start to understand that there is a journalism where the people comment and destroy what the journalist and the politician say. “You are a reporter, your job is to be aggressive,” said the professor in the first semester’s radio class. It’s my new mantra.
Forget what you learned before. The notion of a photo reporter from 20 years ago already doesn’t exist today. Now you are a multimedia reporter or you aren’t one. Each moment is better as long as your post on Instagram is better. Welcome to the future. 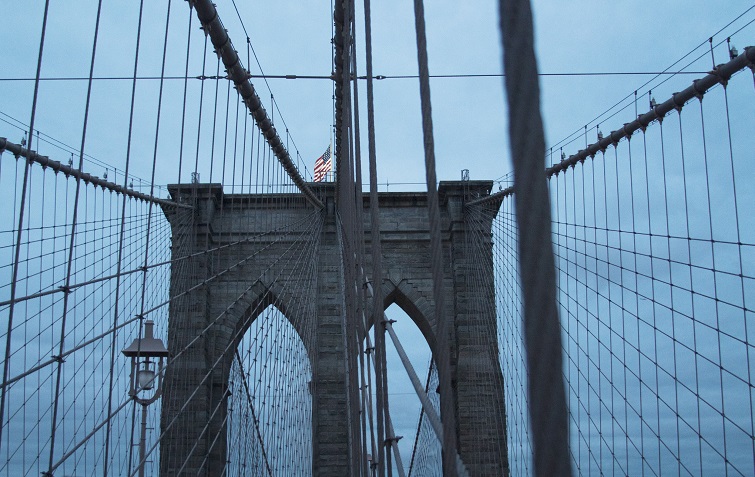 In New York I lived the first election where citizens voted for their president. For the first time a woman could have attained the post. I remember the night of the elections with the result that the majority of the New Yorkers couldn’t believe. It was the gloomiest and most deserted Times Square I can remember. That night I waited for the speech by the president of the United States outside the Hilton Hotel, where he was staying.
Perhaps I am able to draw a mental map of the land of opportunities, and this place which is called the concrete jungle. I love the city because it has given me the most incredible stories: the Cuban girl who arrived one night to JFK (with a suitcase whose wheels had been broken) to study a master’s in Journalism. The priest who has adopted several dozen immigrant minors to avoid their deportation.
My favorite person in NYC? Kenneth T. Brown, a 53-year-old Afro-American resident in the Bronx. In the 1980s he used to consume crack, then he was in jail. When he came out he got a job in one of the Twin Towers, until he lost his job on 9/11. Now he makes a living playing Astrud Gilberto’s melody on the subway.
Kenneth’s clarinet is missing some keys, like he is missing teeth in his mouth. The day we crossed paths I was headed for the Bronx. He looked at me with that faraway look in his eyes from so much crack. The density of the air changes in the train wagon with his bossa nova. Kenneth comes close and says: “Who are you?” with those red and round eyes. “I don’t know who you are. But smile!” 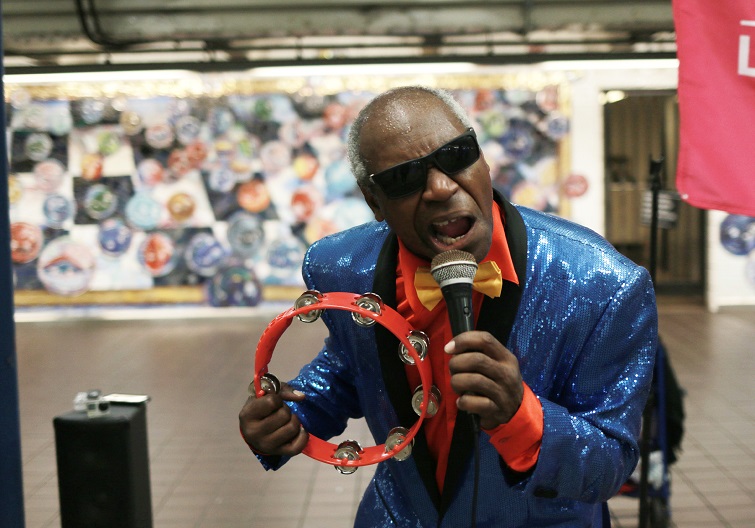 My favorite city symbol? The irreverence of the chewing gum on the sidewalks, black with time. The strangest? The people who seem they are talking to themselves while walking, but who are actually talking on the phone. The most intense experience? Going on weekends to take pictures of protests. I adore that freedom of protesting in the streets. What terrifies me? The possibility that one day someone places a bomb in the subway, discovering the notion that terrorism exists.
I learned that one mustn’t look strangers in the eye; and to Google everything before asking about a doubt; to drink coffee in the morning and at all hours of the day as necessary. That I like iced coffee and that there is an app for almost everything. That most women here don’t cook every day. That for some my identity fits in a small box: I am a Latino woman in the United States, and my intelligence can be measured according to how perfect I express myself in English. And despite the presidential decrees, there is a city that keeps its doors open to immigrants: refugees are welcome here.
I have also given my American colleagues something in exchange. One day someone asked me during a class where Cuba’s link to the South American mass was on the map. I then told that person that Cuba was an island; a piece of land a few miles from Florida, where the end of all roads is the sea. It is a country, I said, where two or three films are produced a year, there are five TV channels and there are no McDonald’s, at least not with that name; where we have seen Game of Thrones, House of Cards and almost everything from Hollywood thanks to the weekly package.
Precisely on the day when I celebrated my one year in the United States, on August 5, I went out to eat ramen alone in Los Angeles. My Japanese soup was that safe place where it doesn’t matter from where I come and what accent I have. My first anniversary caught me in LA, where I traveled to work as an assistant with the Emblematic Group, a company that writes journalistic stories using Virtual Reality. Those days in California were the revelation that it is possible to do journalism with you in the middle of the story. You can travel inside a DNA cell and take the place of the character. It’s the wonderful sensation that it is possible to recreate all the worlds the mind is capable of conceiving. After this experience, there is no way to be the same person again, or wanting to tell stories the same as before. 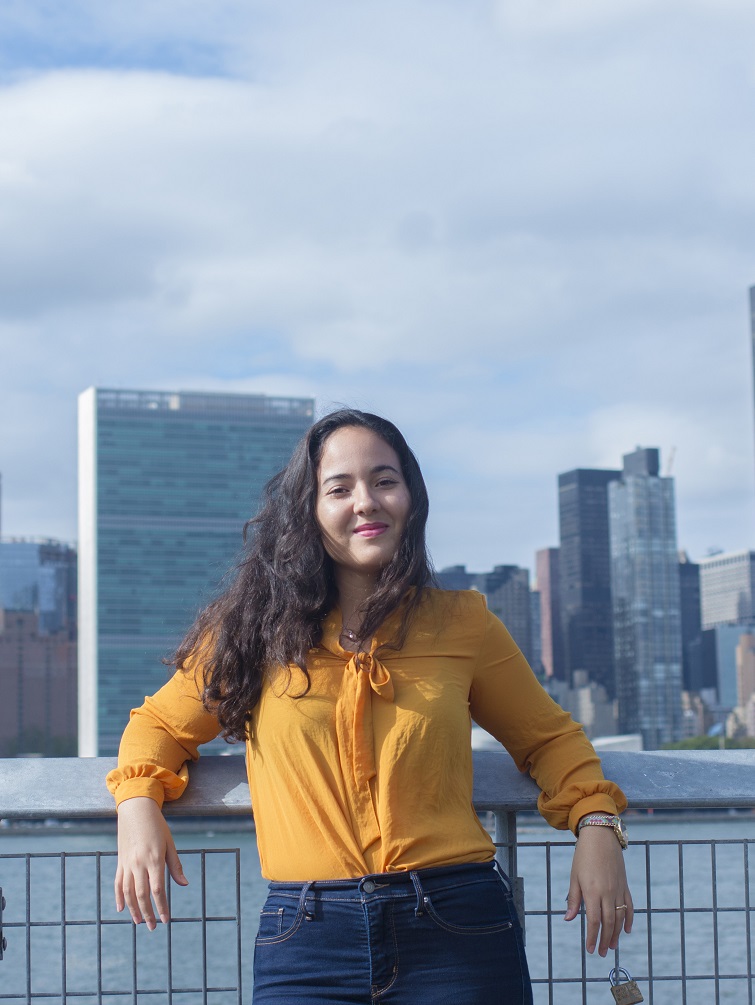 What do I want to do after this? It’s no longer popular to start-up a magazine, now it is all about smartphone apps. New York makes you feel that nothing is sufficient. It’s not enough to have gotten to the city if you don’t leave your mark there, even if its engraving your name on one of the subway walls. Let’s go viral!
There’s a scene from my life during this year that has marked me. I met a Buddhist nun for a story in Corona, Queens. In our first meeting Lianji told me she was living her retirement there. When I returned a few days later without having notified her, Lianji had gone out. She was in Long Island, she said on the phone. And I went there, not knowing what to expect later. The nun got to my meeting driving a VW, with her pacifist smile intact. She invited me to have a strawberry smoothie at a nearby McDonald’s. “Time is not Money,” she said. I’m endeavoring to remember this.