Variety and exquisiteness, cordiality and care are attributes that distinguish Havana’s Betty Boom Restaurant-Cafeteria. That’s how its owner, Ayxa Vázquez, imagined it even before the place became a reality.

“According to my personal experience, I know it’s difficult to find a place that pleases the entire family, that satisfies the children as well as the parents. That’s why I said to myself that if I was able to open my own restaurant, it would have to have a great variety of dishes and a careful attention that, above all, would prioritize making all our clients happy. That is what we have tried to achieve,” Ayxa confesses to OnCuba.

Four years after its opening in November 2014, Betty Boom is fulfilling in detail its owner’s guidelines. Her menu has a wide range of exquisitely made offers that go from pastas and pizzas, liked so much by the young ones, to meats, fish, seafood, salads, different types of rice, hamburgers and sandwiches.

Its shakes and natural fruit juices, singularly decorated, are some of its other hallmarks, as well as its extensive cocktail menu.

But its distinction doesn’t end there. Together with its gastronomic excellence, this restaurant proposes varied spaces to taste its dishes: from its air-conditioned rooms with different atmospheres and the expected bar, to an open-air area in which you can enjoy the aromas of the coal rotisserie. It even has a small children’s park in which a person takes care of the kids

In late August a new venue, more welcoming and spacious, opened its doors on 5ta. A between 48 and 60, in the Miramar district, very close to the previous one. There, from 11:00 a.m. to 12:00 a.m., it receives numerous clients, Cubans and foreigners, who usually return for an experience that goes beyond the purely gastronomic.

“In Betty Boom you are always received with a smile; you breathe well-being,” affirms Ayxa, “and clients can perceive this. That’s why many return. And that’s why we always make an effort to provide the best, to attend to each detail, so that each experience will be more satisfactory than the previous one. The regular clients are more demanding and we can’t go wrong.” 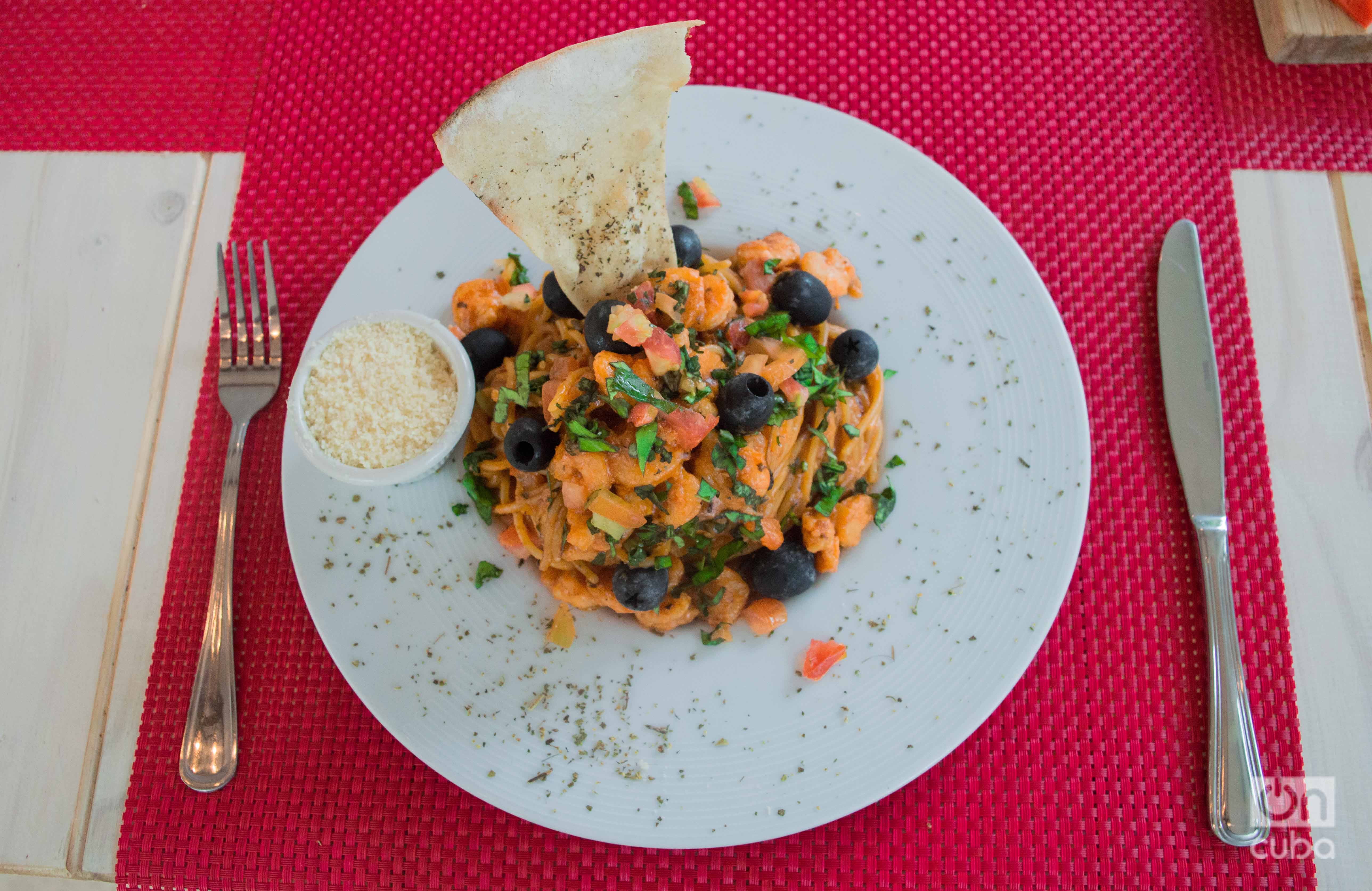 Betty Boom pays homage to one of the world’s most famous animated cartoon characters: Betty Boop, a representation of the flapper girls who, with their liberal image and attitude, did away with the traditional feminine scheme of the 1920s and 1930s in the United States.

This restaurant-cafeteria is a veritable sanctuary for this cartoon character. Her image is multiplied on the tables and walls; the bar is decorated with a chronogram of the character.

Ayxa Vázquez was inspired by its colors for the business’ identity. Betty’s red is found in what the waitresses wear as well as in the place’s decoration and even the dishes, thanks to the use of strawberry, tomatoes and other ingredients and seasonings acquired firsthand from local producers or in the city’s markets.

“The feminine touch and sweetness are essential in our restaurant; they form part of our image,” explains the owner, who highlights the importance of details so that clients “fall in love with Betty Boom.”

Ayxa has no gastronomic training. She studied cybernetics in the University of Havana before defending a proposal in which feminine beauty and talent are antonyms. Hers is a story of courage and entrepreneurship that shows women’s possibilities in today’s Cuba, especially in the private sector.

She recognizes that running a business like hers comes with “a lot of sacrifice” and she doesn’t doubt in backing her husband and daughters. “My personal dynamics revolves around the restaurant, it has changed my life, but work becomes easier to the extent that the entire families is involved.”

The recipe for success

From her several years of work in foreign firms established in Cuba, Ayxa learned the value of the treatment of clients, of exchanging with them and their opinions’ feedback. “That experience has served me a great deal in the restaurant,” she affirms.

However, above her skills as an entrepreneur, she prefers to extol the work of her team.

“This is a very absorbing type of work, in which you always have to be present, but I have a team I fully trust. All of them, from the waiters and waitresses, the cooks and the cleaning people to the buyers and heads of shifts, have a great sense of belonging and they feel the restaurant as their own. With that a lot can be achieved,” she says.

For Ayxa, the recipe for success is team work. Although she doesn’t deny that achieving that different characters get along can be complex, she is betting on keeping alive the motivation of her employees: “We talk a lot with the workers, we discuss about the dishes. If one of them has a good idea, we try it out because I’m interested in motivating creativity in all of them. They are the protagonists of what we have achieved.”

The owner of Betty Boom affirms that there’s still “much to be done” and she doesn’t lose sight of the future. The new regulation for private work in Cuba – which will take effect in December and will limit the amount of permits to one per person – together with the growing competition in this sector, drive her to “have more creativity to maintain ourselves.”

But with the incentive of the already achieved, Ayxa is confident about the effort and about her dreams. She is planning on extending the opening hours until dawn, as she already had in her previous venue, and to not rule out home deliveries.

“What we’ll never do is stop pleasing our clients,” she concludes. “Betty Boom is made for that: so that everyone finds the type of food they like and spends an agreeable moment which they will want to repeat. That is our goal and our raison d’être.”